Every week, we turn people’s data questions into crypto bounties for data analysts to solve.

We’ve got a lucky seven Uniswap data dashboards bounties from the past week to show off. That includes queries on everything from the largest Uniswap liquidity pools to a pair of looks at capital efficiency.

Everyone into the pool — the liquidity pool, of course! We’ll start out with @ahkek4, who identified the largest liquidity pools on V3.

@ahkek4 noted that the TVL of the three largest liquidity pools on Uniswap V2 is dropping. The TVL of the largest V3 pool, meanwhile, continues to rise — and the same trend can be seen for LP deposit and withdrawing actions.

@ahkek4 noted that some of the inspiration came from a previous analysis. As can be seen below, when more active users adopt a token, that increases the price.

Don’t change out of those swim trunks yet. We’re still focusing on liquidity pools in this next segment, as @sammycrypto4 pointed out the most active pools on Uniswap V3. Take a look at the Top 4 pools by TVL below.

Our next bounty, submitted by @dr_ethereum, examines the number of failed transactions. Failures are mostly caused by high gas prices and relative uncertainty surrounding them.

As @dr_ethereum noted, users have continued to compete for block space in recent weeks, even despite an increased gas limit. This results in an expectation of higher transaction costs.

Out of Range positions

Our next stop on this week’s tour of Uniswap submissions is a look at Out of Range positions from our friend @ryantheeng.

Take a look at the biggest positions out of range below. According to @ryantheeng, there are two reasons why these positions are out of range: the price could have moved outside of the range set by the provider, or the provider may believe their range set is where token prices should be. 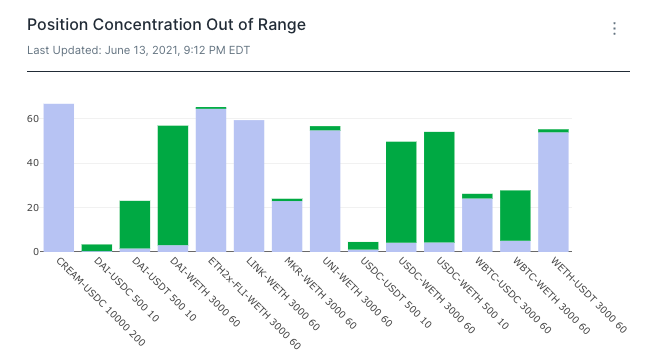 Next up are a pair of bounty hunters were examining capital efficiency — Andruu and @visavishesh.

As Andruu’s submission pointed out, Uniswap V3 is way more efficient than V2, and that’s by design. Andruu noted that the majority of liquidity (that is, roughly three-quarters of it) is held in a tight range — even for non Stable-Stable pairs.

Last, but not least, is a Uniswap data dashboard that takes a closer look at maximizing ROI.

As @visavishesh points out, a simplistic or even naive approach to maximizing ROI would be to find the highest volume pools on uniswap.info and ape into them. Instead, this bounty looked to take a more nuanced approach by finding the answer by adjusting for fee tier and TVL. “I was surprised to see some of the high ROI pools were not strictly speaking the crypto ‘blue-chips,'” @visavishesh noted. “It also was interesting to see that a huge % of total fees come from the top 2 pools.”

He also realized that the answer to that question is dependent on the rebalancing strategy for the LP, and so provided two time scales — 7 days and 30 days.

That does it for this week. Thanks to everyone who submitted such great Uniswap data dashboards!

If you want to get more involved with Flipside’s incredible community and see your own submissions on our blog, make sure to join us on Discord, follow on Twitter, and subscribe to our newsletter, the Bounty Brief!