Last week, we brought community-enabled analytics to the Terra ecosystem, in the form of new bounties, available right now.

Now, it’s time to take a deeper dive into the ecosystem on the Flipside ecosystem with our Terra data dashboards. And we’re getting some help from Joan Kallogieri and our official Terra ambassador, @mike_platis.

For those that are not familiar, Terra consists of a group of stablecoins that mirror the value of real-world fiat currencies.

Many different use cases are in the works for these currencies. In fact, as Joan points out, Terra is designed to allow you to earn interest on stablecoins, spend crypto easily with merchants, and replace most of your banking needs with one seamless DeFi protocol.

We’ll start our analysis by taking a look at the daily transaction numbers for different wallet types on Terra.

As we can see in the graph below, larger wallets (defined as those holding more than $100K in value) and smaller wallets (everyone else) alike seem to be pulling their weight equality. According to Joan, this could indicate that Terra usage is diversified by both whales and smaller players.

When we compare new and old wallets, meanwhile, older accounts have mostly dominated usage. When we look at the last few days, however, we can see an increase in usage from newer accounts, which could signal that new users are becoming more active.

Next up is a look at the viability of Validators during the recent LUNA price drop. As @mike_platis reminds us, LUNA holders do not stake their tokens directly. Instead, they delegate their Luna to a validator, giving a wider range of LUNA holders access to rewards.

When we examine staking activities, as can be seen below, there’s a surprise. The raw volume of staking spiked during the peak of the bull-run in mid-March, rather than during the recent price drop.

“The three highest volume days of total delegations were followed by the three worst drops percentage-wise in LUNA’s price” @mike_platis noted. “It seemed as if delegators anticipated the correction of their over-extended asset.”

Also interestingly, staking supply has continually grown in recent months, regardless of the price of LUNA itself. Even immediately after the drop in price, @mike_platis, points, activity continued to increase, showing users’ confidence in the overall ecosystem.

“Terra passed this stress test relatively well,” @mike_platis noted. “Convicted holders became buyers and immediately put their LUNA to work by staking it. This shows a real demand for LUNA as collateral and as a productive asset. LUNA is positioned as a value capture for all activity within the ecosystem.” 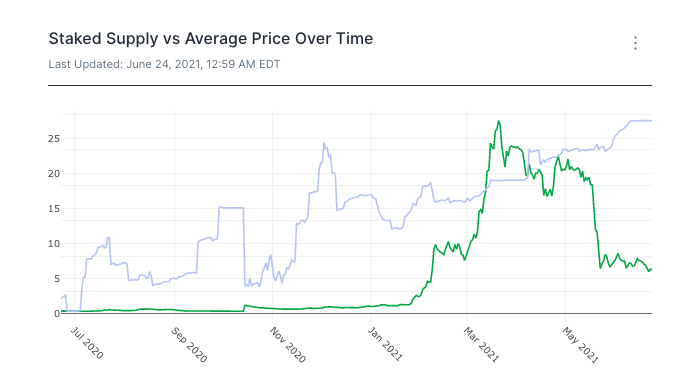 Those who did remain in the network saw a decreasing tax rate. That can be expected to continue, @mike_platis said, as staking activity and transactions each continue to increase over time.

Want to learn more about the Terra ecosystem? You can read our explainer here, or check out our Terra data analytics here.

You can join Flipside Crypto on Discord to join the conversation on Terra, and be sure to follow Flipside on Twitter and subscribe to the Bounty Brief to get the latest news, data, analysis, and insights!