Uniswap v3 is here — what’s new, and what does it mean for you?

Last week, a new unicorn appeared on the crypto scene as UniSwap unveiled version 3.0 of its popular decentralized exchange on Wednesday, May 5.

The market has been eager for this new version of Uniswap, and the time of the launch is seemingly fortuitous, as v3 makes its debut in the middle of a bull run for the Defi space. So what does v3 mean for you?

So, what does v3 bring to the table, and why is it here?

The latest update to the exchange was announced in March of this year and promises several upgrades and improvements. It’s the first time Uniswap has been upgraded since version 2.0 was launched in March 2020, following up on the initial version of Uniswap, which launched in late 2018.

The most notable improvements packed into v3 are concentrated liquidity and multiple fee tiers.

Concentrated liquidity offers individual liquidity providers increased control over price ranges. Those positions are then aggregated together into one pool, allowing users to trade against one combined curve. Multiple fee tiers, meanwhile, allow liquidity providers to be more fairly compensated for the level of risk they take on.

What does this mean for Uniswap users?

According to Uniswap’s blog post announcing the upgrades, liquidity providers can now “provide liquidity with up to 4000x capital efficiency relative to Uniswap v2, earning higher returns on their capital.” They can also significantly increase risk exposure to their favorite assets while reducing downside risk.

v3 also allows LPs to trade assets by adding liquidity to a price range entirely above or below market price, which allows them to impose a fee-earning limit executing along a smooth curve. Improved capital efficiency, meanwhile, also allows for improved low-slippage trade execution when compared to centralized exchanges and stablecoin-focused automated market makers.

In its blog post, Uniswap also noted that “the gas cost of v3 swaps on Ethereum mainnenet is slightly cheaper than V2,” while the cost of those made on the Optism deployment will “likely be significantly cheaper.”

Uniswap v3 has been live for roughly a week, and already, we’re beginning to see the impact of these updates on the exchange.

Flipside Crypto’s Eric Stone took a deeper dive into some of the data surrounding v3 using our Velocity dashboards. Most notable, Stone said, were the differences between the real liquidity of v3, and virtual liquidity, or the amount of liquidity providers would need to earn the same fees on v2 as they do on v3. 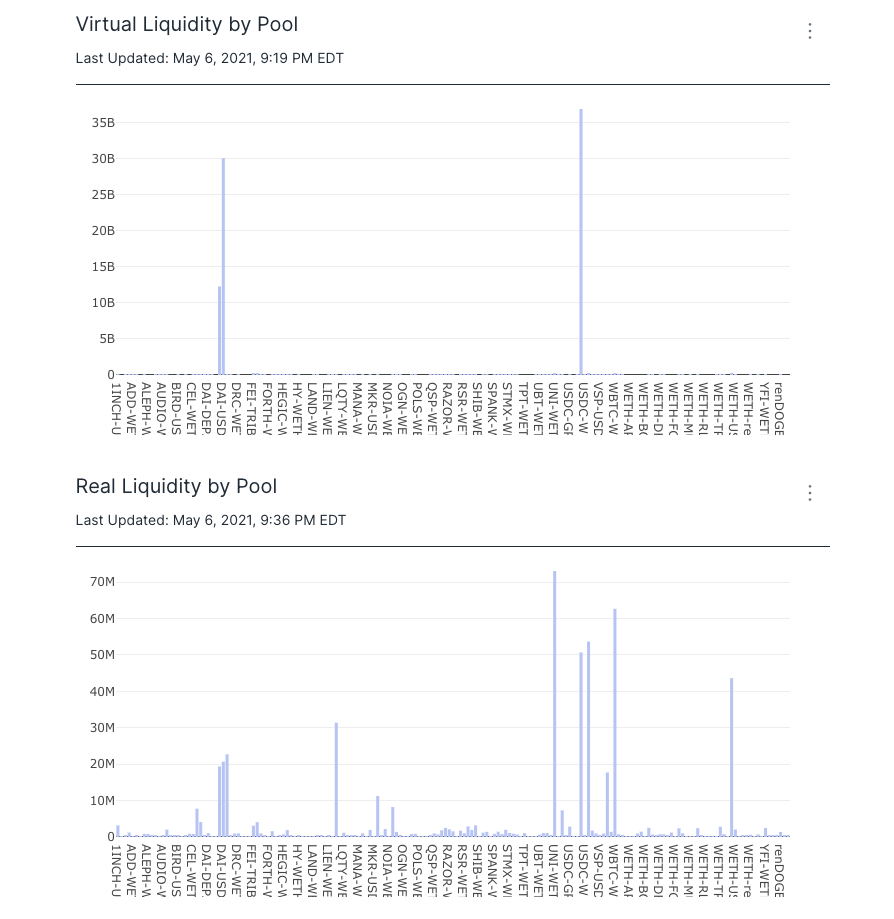 “There are indeed billions in virtual liquidity because the liquidity is so concentrated in particular bands, so there are high fee earners and a small amount of liquidity.” Stone said. “That means you can make a lot more money on v3 while supplying less than in v2.”

Liquidity providers, meanwhile, are already seeing fees start to climb. According to Flipside’s data, as of Monday, May 10, the top earner had already collected more than $3.6 million in fees, while number two had earned nearly $3 million.

There were also five other LPs to earn more than $1 million in fees within just a few days of v3 going live. That, Stone said, was not entirely surprising due in large part to the fact that v3 is “much more concentrated” than its predecessor, meaning that those who have large pre-existing balances and can quickly adjust their positions are set up for success on the updated platform.

“It doesn’t make sense to be in there unless you have a ton of money already,” he said. “The fees are higher on v3, but to really tap into those fees, you have to specify a very narrow target and adjust it often, which can be costly.”

So what comes next?

We’ll be looking to go even further, and use our best-in-class dashboards to build the biggest and best dashboard for v3. Join Flipside Crypto on Velocity to ask and answer queries from around the Uniswap community with our labeled and organized data and see how Uniswap v3 is being put to use.

And don’t forget, we need your help to build the biggest and best dashboard for Uniswap v3! Just join us on Discord to get started, and don’t miss out on our Uniswap voice chat on May 11 from 12 PM to 1 PM ET!  Plus, be sure to follow Flipside on Twitter and subscribe to the On the Flipside blog to get the latest news, data, analysis, and insights!