What’s happening on-chain when it comes to Lido?

That’s what Flipside’s community of analysts has been hard at work trying to answer. In a previous look at Lido, we examined what weekly swaps and transactions can teach us about Lido and the ecosystem that surrounds it with @crpytoicicle and @jp12__.

Now, we’re taking a closer look at use cases and strategies for stETH, aka Ethereum staked via Lido. To do so, we’re calling on some help from a pair of Flipside Crypto expert analysts — namely @chainiqedu and @MaybeYonas.

So what use cases and strategies do our analysts recommend?

We’ll start by examining stETH use cases via this submission from @chainiqedu.

As @chainiqedu notes, most stakers are holding their tokens in a decentralized exchange — 53% of them to be precise. Many others are putting them to work via DeFi.

So which DEXes are being used to hold all that stETH? The far and away leader among DEX holdings, at least according to @chainiqedu, is Curve.Fi, which holds nearly 100% of all stETH on a DEX.

Meanwhile, when it comes to using stETH in DeFi, there’s an even more dominant force. The Terra savings protocol known as Anchor is home to 100% being used in DeFi according to @chainiqedu. 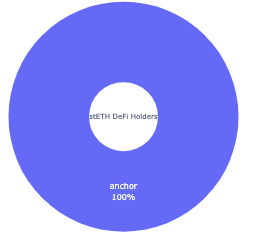 So that’s how stETH is currently being used. But which strategies produce the best results? That’s the subject of this submission from @MaybeYonas.

We’ll start with using stETH on Anchor, a popular strategy, as we saw above. This involves using stETH to mint bETH, depositing that bETH as collateral to Anchor Borrow, and borrowing UST to deposit into Anchor Earn.

As the data below notes, just borrowing via Anchor produces an expected APR of 9.34%, while borrowing and deposit raises that figure to 13.5%.

That, of course, isn’t the only option for stETH — nor is it the only strategy that @MaybeYonas examined. Check out the full submission here to see other strategies, including HODLing and using Yearn Finance.

Do more with Lido data 🔍

That does it for now. Thanks to everyone who submitted such great Lido data dashboards! Want to get more involved with the Flipside community and see your own submissions on our blog? Join us on Discord to get started.