Answering The Toughest Terra Questions: How did bAssets Fare in Down Markets?

Every week, the Terra community throws its toughest questions at Flipside Crypto analysts — and time after time, they provide an answer. This time, the question focused on the history of bAssets like bETH and bLUNA in the Terra ecosystem.

More specifically, we’re looking to find out exactly what happened to assets like bETH and bLU during the downturns in September and May. To do so, we’re calling on help from @chainiqedu, @mintingfarms, and  @jp12__.

First up is @chainiqedu with a look at the history of bETH and how it tracks with ETH.

As we can see in the graph above, bETH and ETH prices tend to move in tandem with one another. This was true both during bETH’s price rise in August and early September, and the downturn that followed in September.

How did bETH fare during September’s downturn?

Our next submission offers a further zoomed-in look on bETH’s price action in September.

As @mintingfarms notes, bETH first made its appearance in mid-August of this year. Just a few weeks later, the newcomer saw its first real shakeup when ETH prices dropped from roughly “~3.9k to as low as ~3.0k” on September 7. So how did bLUNA react?

As we can see in the graph above, the oracle price of bETH remains consistently lower than the bETH oracle price. What’s more, as @mintingfarms points out, the Ethereum Uniswap v3 price as the height of the bar charts exceeded most bETH oracle prices (in green).

And when we examine the price ratio of bETH Oracle prices with the ETH price from Uniswap V3, as has been done above, we can see that the bETH oracle price was ~3.33% lower than the spot price of ETH on Uniswap v3 pool.

bLUNA dips during the May crash

Many users then rushed to get out of bLUNA collateral, instead embracing LUNA and other stable assets. 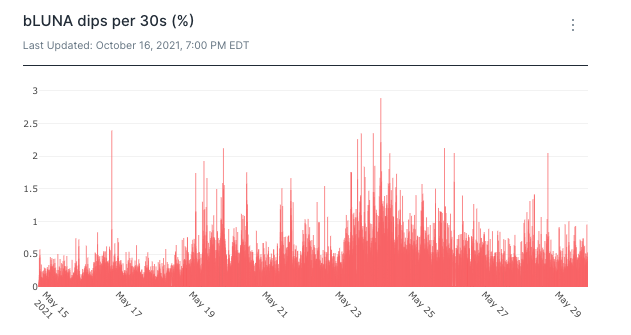 Do more with Terra data 🔍

That does it for this week. Thanks to everyone who submitted such great Terra data dashboards!

Want to get more involved with the Flipside community and see your own submissions on our blog? Join us on Discord to get started.