The Aave governance process got a facelift in December of 2020 when v2 made its official debut. More than 200 proposals have been submitted since.

But how does governance on Aave really work — and how much power and influence do whales wield?

We’ve got two Aave data dashboards that can help us answer those questions. That includes submissions from  @jp12__ and @Ndhung1104.

How does Aave governance work?

We’ll start by examining the Aave Governance v2 process, implemented in December of last year, with some help from this submission by @jp12__. As @jp12__ notes, this v2 process replaced v1, which only allowed the Aave Genesis Team to submit Aave Improvement Proposals, or AIPs.

To submit a governance proposal under v2, users first create a Request for Comment (ARC) outlining the proposal and sharing it with the community. Snapshot polls are then conducted, and eventually, the ARC is turned into an AIP which goes up for a vote.

As @jp12__ notes, so far more than 240 ARC have been submitted to the community.  Most of these have centered around governance on Aave or the creation of a new asset. 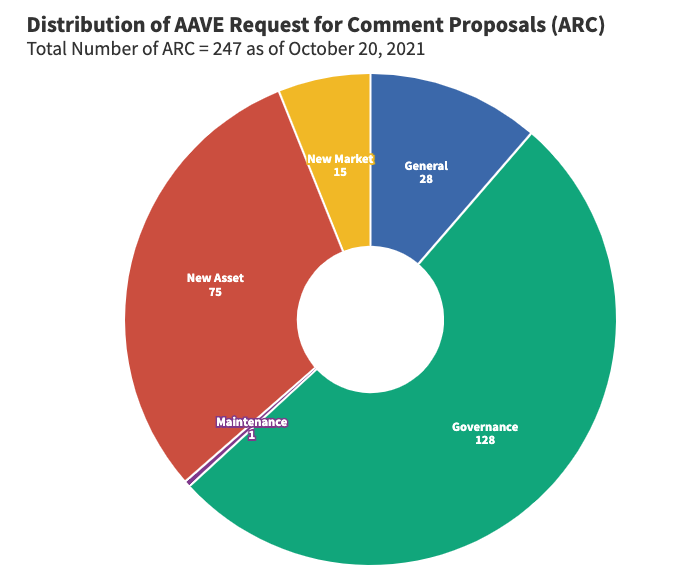 So far, 36 of those ARCs have become AIPs. Six of those 26 have been implemented, two are works-in-progress, and the vast majority, 28, are still under consideration, according to @jp12__.

The most influential voters on Aave

Next up is a submission on Aave voters from @Ndhung1104. This time, our analyst sought to find out who the biggest and most influential voters on the platform are.

How much power do these big voters actually have, and how much can they impact? According to @Ndhung1104, most proposals need between 300k-400k AAVE of voting power in order to pass an AIP with no objection. With the top five collected above alone voting in favor, however, a proposal would have roughly 420k voting power — more than enough to pass.

Do more with Aave data 🔍

That does it for now. Thanks to everyone who submitted such great Aave data dashboards! Want to get more involved with the Flipside community and see your own submissions on our blog? Join us on Discord to get started.